Today’s post is about “The Godfather of Fitness” – Jack Lalanne. 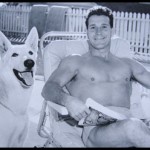 Jack is a fitness and cultural icon, who has promoted the benefit of regular exercise and healthy eating in a career that has spanned over 70 years and inspired millions.

He presented an extremly succesful television programme, called “The Jack LaLanne Show”, that ran for 34 years! Which educated the viewers – or “students” as he called them – on nutrition, exercise and general wellbeing.

He also produced some famous quotes:

“Ten seconds on the lips and a lifetime on the hips”

“Better to wear out than rust out”

“Exercise is King, nutrition is Queen, put them together and you’ve got a kingdom”

Jack is still going strong at the age of 94, working out every morning in the weights room for 1 1/2 hours and then swimming or walking for another 1/2 hour.

He’s a classic clip of Jack in action during his show:

For information about Jack, visit his site at www.jacklalanne.com

Thanks again to James at Excelsior for this excellent amd inpsirational material!