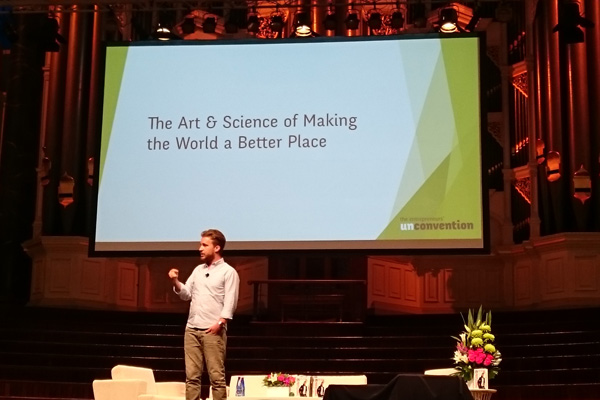 …well that’s what he claimed.

This Saturday saw Rowena and myself go to the Entourage Unconvention 2015.

The aim of the event is to have successful entrepreneurs from a host of fields share their experiences and stories.

In premise, this sounded awesome (or so I thought).

The opportunity to spend several hours listening to highly successful people about the challenges they faced in business.

But the reality was some very thin advice layered (just barely) over a 20 minute advert for what each company offers.

The ‘highlight’ of which was the talk by Jack Delosa (the founder of the entourage company).

My “spidey sense” began tingling when he lept to the stage and proclaimed that unlike the other presenters, he doesn’t need slides.

He told us a 20 minute story on how as a kid he was a general pain in the ass and didn’t work hard as he should have. (Is that not 90% of us at school?)

On his graduation from high school he won an award for most improved and as part of the award he received a book voucher.

The story goes that he went to the business and psychology section of Dymocks, picking up a copy of “Think and Grow Rich.”

The story fall apart a little here, as somehow he has to give the book to the school so that they can re-present him with his award and his book.

Anyway… he goes on to say that during the re-awarding the headmaster read out the title of the book, which made the whole school laugh as he received his book on stage.

Followed by a 5 minute revelation that he was invited back to his school 10 years later to lecture and inspire the kids, and it just just so happened to fall on the exact 10th anniversary of the day he was laughed off the stage.

I think the lesson he was trying teach was that other people’s expectations of you don’t have to limit your future.

It was hard to cut through all the fluff and pomp he was using to pump everyone up into buying membership access to his website.

It reminded me of the fitness industry.

The net result for us…a warm fuzzy feeling that lasts all of 5 minutes and then nothing.

I think the lesson here for me was that the real success stories and true entrepreneurs would have been too busy actually doing something of worth, rather than to be sat there pumping the room full of hot air.

ALWAYS LOOK AT THE RESULTS AND TRACK RECORD OF THE PERSON TELLING YOU HOW GREAT THEY ARE.

The proof they say, is in the pudding.