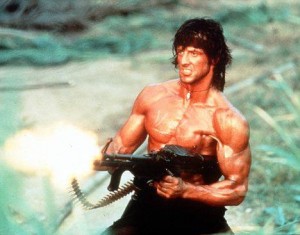 I admit it, I’m a little bit absent minded when I’m focused on one thing at a time (no, not that…), in this case fixing a hinge in the kitchen.

There I was, screwdriver in hand, walking back downstairs to the toolbox and then I heard it.

That awful thud of the door slamming shut behind me and realising, at that exact moment, I had locked my keys IN the apartment. With my phone. With my wallet. With my car keys.

When you live on a second story apartment, this is a problem.

To add to this, Rowena was still in Brisbane working at the KPMG office there.

I had no ETA on her return – assuming she would get back around 9pm. It was currently 5.30pm.

I had two clear choices.

1. Do nothing and wait on the stairs for Rowena to get back.

2. Find a way into the apartment via the 2nd story balcony.

I opted for choice 2, which required two mission critical stages to be completed.

First I had to find something to give me a bit of bunk up to able to reach the balcony. With no ladders available, I managed to procure two milkcrates from the house next door.

Secondly I needed access to the apartment below, so I could place said milkcrates on their wall and get up.

Luckily for me, someone was IN. A lovely lady called Claire.

After introducing myself, with milkcrates in hand, I proceeded out to their wall.

Claire held the milkcrates in place while I scambled up, jumped off them and up onto the balcony wall.

Without my honed ability to perform proper strict chin-ups from straight arms I would have been left dangling and squirming until my eventual fall (much like Rambo in First Blood when he jumps into the tree.)

To a well earned response of a round of applause from Claire and a passer-by waiting at the bus stop, I was up and in the apartment.

4 hours later I received a text from Rowena to say the plane had missed the Sydney Airport kurfew window and she was not stuck in Brisbane for at least another night.

In fact she’s still there now.

1. Be ever vigilant about having my door keys in my pocket BEFORE I leave the apartment.
2. Keep the milkcrates as an emergency “key” if this ever happens again.
3. Being strong helps when in a crisis.
4. Doing nothing is an even more risky strategy than searching for a solution.

If you need to get strong (should you need to Rambo up the side of building), you know where to come: